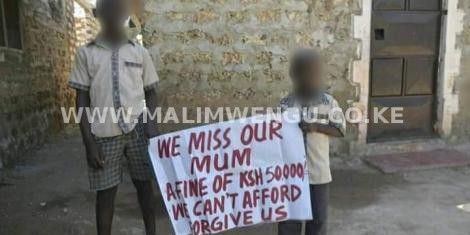 A four-year-old boy in Mombasa is seeking help in raising Ksh. 50,000 fine to have their mother who was sentenced to six months’ imprisonment after a fight released.

His mother Pauline Atieno was sentenced in July to serve a prison term for assaulting her neighbour. Atieno and his neighbour are said to have fought for their sons, who engaged in a fight while playing.

The boy is said to have fought with his playmate after pouring water on him after which the friend ran to call his mother.

It was then that a physical confrontation ensued between Atieno and the neighbour, leading to a fight between the two mothers.

The court found out that Atieno bit the neighbour’s finger during the fight, something that landed her the sentence after she was reported to the police.

Kevin Okanja, the 4-year-old boy’s father, confirmed that his wife was in custody after a fight, adding that he had tried to get the matter out of court in vain.

“They attacked my wife, and that’s when she bit the neighbour’s finger in retaliation,” he explained.

Kevin said he even offered his TV, gas and woofer as part of the settlement, but the mother of the child refused and demanded Ksh instead. It’s 150,000.

Pauline was sentenced to six months in prison or to pay Ksh. 50,000 fine in order to gain her freedom.

Pauline was arrested on Thursday, July 16, and spent almost two months in jail with her husband explaining how his other son nearly burned down their house while cooking.

“The boy almost burned down the house while preparing tea, they forgot to check on the tea. I found the sufuria red hot with the gas still on, “Kevin said.

“The incident leaked to the landlord who was not very impressed. Meanwhile, I am ill and the boys keep asking me about their mum,” he added.

Kevin wished that he would have connections with philosophical politicians such as Nairobi Governor Mike Sonko and Vice President William Ruto if they could lend support.