Media Personality Davidson Ngibuini, popularly known as DNG has declared his candidacy for the Woodley, Kenyatta Golf Course Ward in 2022.

In an interview, DNG expressed confidence that he will win the MCA seat and represent the people of Woodley in the Nairobi County Assembly.

“I will be vying be for the MCA Woodley, Kenyatta Golf Course Ward. All my agenda that has to do with community development is about people and in terms of how best to empower, impact and change the lifestyle of the people of Woodley and Kibra as a constituency. It’s by being on the ground, dealing with the issues that they have been facing.

For how long will Kibra remain the largest slum in Sub-Saharan Africa. A lot of people hate living in that area. How can we empower these people to improve their livelihoods, take their hustles to the next level. The system has been positioned in such a way that its suppressing the people who are trying to do their level best and come out of the ground and live a good life and the only way we are going to change that is by Legislation” DNG said.

DNG stated in an Instagram post that his candidacy was also inspired by people who saw leadership skills in him and encouraged him to run for an elective position. 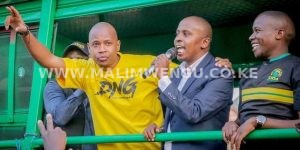 President Uhuru Kenyatta has failed to appoint High Court judges who were part of a bench that declared the Building Bridges Initiative (BBI) bill...