Mathew Gathua, owner of Valentine Cake House opened up on his journey from being a dishwasher to owning one of the most popular baking houses in the country.

Gathua dropped out of school due to financial problems and without a choice he ended up as a dishwasher.

He revealed that he has never attained any certificates despite growing into a multi-million business, with the only one he possesses being on fire management.

Valentine Cake House today has 20 branches all over the world, with the 21st opening in Eldoret soon.

“I started as a kitchen hand, people do not understand how I have never had training; the only training I have had is on fire training, which happened when Mombasa Municipal Council came to train us on how to handle fire. That is the only certificate I have.

“When I went into washing dishes, it so happened that the dishwashing and pastry area were close, so, anytime I would finish washing dishes I would rush to help chefs in the kitchen,” he explained.

He progressed from being a dishwasher to a baker by helping out in the pastries section after his shift, where his help was much appreciated, and with the staff being elderly, they took the opportunity to make breaks.

He explained in depth how he began baking and shared some of the hardships he had to endure while earning peanuts.

Gathua urged the younger generation to acquire a particular skill that will set one apart from the rest with many youth graduating and the job market being squeezed. 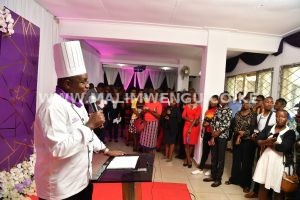 Akothee Opens Up On Her Struggles With Baby Daddy, Nearly Committing Suicide