Tanzanian President Samia has arrived in the country for a two-day state visit.

The Air Tanzania plane carrying Suluhu touched down at the Jomo Kenyatta International Airport some minutes to 10 am.

Suluhu was received at the JKIA by the Kenyan Foreign CS Raychelle Omamo among other political leaders and will be received by her host, President Uhuru Kenyatta at the State House, Nairobi.

She was in company of the Kenyan Ambassador to Tanzania Dan Kazungu among other delegations.

It is her second visit outside Tanzania since she took over the office in March this year, following the demise of her predecessor the late John Pombe Magufuli.

She will be in the country for two days and is expected to address a joint sitting of the National Assembly and the Senate on Wednesday.

The government plans to give Tanzanian President Suluhu Hassan elaborate State honours, including an opportunity to address a joint sitting of Parliament and a 21-gun salute.

Moses Kuria Among Three MPs to Face Expulsion From Jubilee 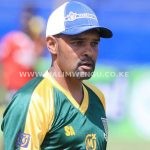 Sports Stacey - May 18, 2021 0
Mathare United have fired head coach Salim Ali as a result of the club's poor performance in the FKF Premier League. The club confirmed on...

News Stacey - May 18, 2021 0
Wajir deputy governor Ahmed Muktar is set to be sworn in today as the new governor of the county. "The ceremony shall take place on...

News Stacey - May 18, 2021 0
Following an agreement on economic policies reached by IMF staff and Kenyan authorities in an aid package approved in April, the International Monetary Fund...

DG Ahmed Muktar to be Sworn in Today as New Wajir...