Two dormitories at Tengecha Girls High School have been burnt with property of unknown value destroyed after a Saturday morning inferno.

Kapkatet location chief Daniel Kosgey confirmed the incident saying the cause of the inferno was yet to be established.

The chief said the two old dormitories, one called Kenya and the other one called Kilimanjaro hosting 30 and 50 students respectively caught fire when the students were attending morning preps.

He said the students’ belongings were completely destroyed in the inferno and nothing could be salvaged.

The chief however said no casualties were reported during the incident.

According to Kosgey, members of the public helped put out the fire with the help of the county government’s fire department.

He revealed that investigations have been launched to establish the cause of the inferno.

Consequently, learning activities are ongoing with the school management finding a way forward to address the same.

Cases of arson in schools increased earlier this year, with education stakeholders linking it to student indiscipline.

The CS noted this because students were using alcohol-infused sanitizers to set dormitories on fire. 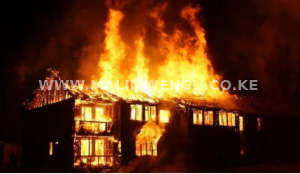