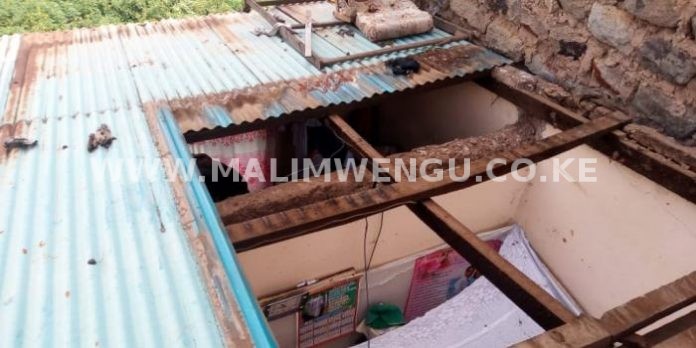 A family has been left homeless after the landlord allegedly sent youths to evict them from Dune area, Ruai where they have been living for five years.

“Very early in the morning while we were still sleeping, we heard people on the rooftop. They were struggling to cut the ceiling. They succeeded in creating an opening and got into the house, unlocked the door, removed and carried it away,” the wife narrated.

It all started in 2020 after the first wave of Covid-19 pandemic hit when Victor Mwangi, a former manager at a famous night club in Thika called Skatters, lost his job.

“When I lost my job,I assured my landlord that I will not be able to pay my rent on 7th of every month as I don’t have a fixed source of income. But what I knew is that the house was not mine and I had to work hard to pay rent every month however late, for which I have done since then with authority from him,” Mwangi stated.

According to Elizabeth and Victor, things went south almost a year later when the landlord expressed his dissatisfaction with the new arrangement.

He sent them a text message demanding that they pay rent on time or vacate the premises.

“My husband answered the text saying he would pay the rent when he gets cash. This reply seemingly annoyed the landlord who said Mwangi was being rude,” Elizabeth added.

According to the couple, on March 11, 2021, they received a notice from the landlord requesting them to vacate the house within a month.

The couple and their two daughters are currently being hosted by a good samaritan in Ruai by the name Safi Mohammed.