The Nairobi Governor, Mike Sonko has always been known for speaking his mind. In his critic message on social media, the lawmaker has sparked speculations on his political path.

He described his journey into politics as one of the biggest regrets, further stating he had abandoned his people and asked for forgiveness from God.

“I swear I regret joining politics. It was the worst decision I have ever made. As I retire to bed, I pray that God gives me the ignorance that led me to abandon his people in the wilderness after being forced by circumstances. Lord forgive me. Tomorrow lies in your hands and because you live I can courageously forge forward,” Sonko wrote.

He then attached an old video of the President tearing down ODM leader back in 2013. The politician who is facing a graft case has been having wrangles with NMS boss Badi despite their earlier agreement to work together.

Ruto Reaches Out To Raila For Joint 2022 Race 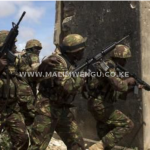